I absolutely love Hallmark Christmas movies. Everything I say is out of this undying, appreciative, in awe type of love. Yes, I make fun of them, but my husband and I make fun of each other all of the time, and we are annoyingly in love.

Welcome to Evergreen, a postcard of a town that is tucked away in the mountains of Vermont. Here, there is one road in, and one road out, everyone is all up in everyone’s business, and you get harassed if you try to leave. Although this kinda sounds like this could be the beginning of a horror film, it’s not! This story has Christmas magic, a wish granting snow globe, The Most Interesting Santa in the World, and a surprising amount of cellphone service! 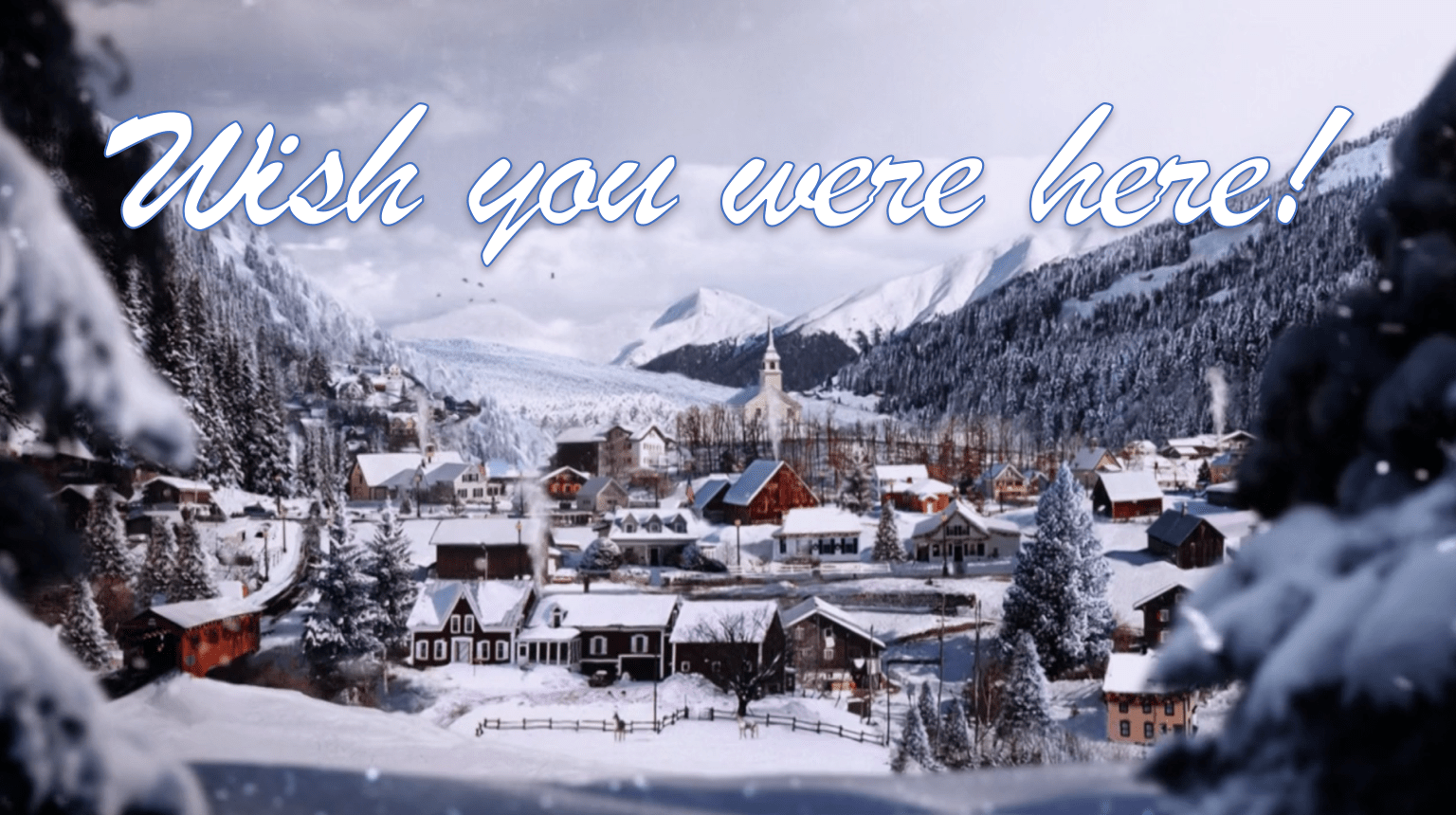 Legend says that if you shake the special snow globe in Chris Kringle Kitchen, close your eyes and wish your heart’s true desire, your wish will be granted! So, excuse me while I jet off to Evergreen and wish for world peace.

K, I’m back. Come Christmas Day, everything should be fine, everyone! 2018 is going to be wonderful! No need to send thank you 4 saving the world cards, I didn’t do it for the recognition.

Allie (Ashley Williams) is Evergreen’s veterinarian, but not for long! She is ditching this small town for Washington D.C. so she can live in the same place as her off-and-on again, longtime, long distance boyfriend, Spencer (Marcus Rosner). They are going to try to make their relationship work, for real.

Spencer is one of those

types. He seems to really like Allie, though, and wants to show her off at his swanky office Christmas party.

Before leaving for D.C., Allie makes a wish on the magic snow globe.

After making her wish, Allie is greeted by a kind, older gentlemen with a giant white beard, and a twinkle in his eye. Could it be…

Santa? If he is Santa, he is definitely The Most Interesting Santa in the World.

Ryan (Teddy Sears) has a daughter, Zoe (Jaeda Lily Miller), and a bluetooth.

I will never not point out bluetooths (blueteeth?????).

For Christmas, they are heading to Florida to go on a cruise. Although Christmas Cruise is probably going to be a #CountdowntoChristmas movie in 2018, Zoe is unimpressed with her father’s decision about how they are going to spend the holidays.

Because Allie won’t be in Evergreen for Christmas, she isn’t able to plan the Christmas festival like she usually does. It is now on the shoulders of her best friend, Michelle (Holly Robinson Peete). Michelle is not excited about this at all. Like, she is super unhappy about this whole situation. And, you will understand when you meet the mayor.

Mayor Ezra is a Hallmark National Treasure. He is also insufferable. He is an actual helicopter and hovers over Michelle and everyone in Evergreen’s every move.

Allie has spent all morning trying to leave for the airport. Her Christmas ornament of a truck is on the fritz. Everyone is guilt tripping her about leaving. A cow is having Braxton Hicks contractions.

Does this have to do with her snow globe wish? Or does she just have terrible luck?

On their way to the airport, Ryan and Zoe make a pitstop in Evergreen. While there, they

Carol tells Zoe all about the ✨magic✨ of the Evergreen snow globe.

Of course, Zoe wishes to spend Christmas in Evergreen. Who wouldn’t want that?

Roughly 15 hours later, Allie finally arrives at the airport in Burlington. And after roughly 15 hours of trying to leave Evergreen, Allie must go back. All flights are cancelled until further notice, and the hotels are full. There is one highlight, however!

While she was at the airport, she ran into her new friends, Ryan and Zoe. Since they are also out of luck, they head back to Evergreen with her. Zoe’s wish just might come true!

Meanwhile, so much has been going wrong with the Evergreen Christmas festival.

(But, poor Michelle! No one deserves to be this stressed out at Christmas.)

Also meanwhile, a rockslide blocked the one-way-in-one-way-out of Evergreen. Allie, Ryan, and Zoe are still unable to go on their trips. Me thinks a wish is at work!

Because their plans have been ruined, Allie and Ryan ❤ get to know each other ❤ !

Allie has the idea to save the Christmas festival by having the residents of Evergreen bake cookies. So, of course, we get a cookie baking montage!

Everything is going great until they run out of cookie ingredients. Ryan goes to Chris Kringle Kitchen to pick up some more supplies. While Ryan is gone,

Spencer flies in ON A HELICOPTER,

because he wants to see Allie, and because he doesn’t want to take things slowly anymore.

The next day, Spencer and Ryan get along super well and decide to get matching BFF tattoos. Or, it’s very awkward, and Spencer all but pees all over the situation marking his territory.

Even though he does this, he takes a conference call and is fine with Allie ice skating with Ryan and Zoe. Bad move, because Allie and Ryan only get closer.

Later that night, Zoe runs into The Most Interesting Santa in the World. I honestly do not remember what they discussed because look at him. He’s just too cool. I was in awe of his beard, his style, how he was perched…just everything. Look at him!

All I know is that after Allie speaks to Joe Cool Santa, she breaks up with Spencer. This is one of the most refreshing breakups in Hallmark Christmas movie history.

No one is the bad guy in this situation. They are both good people, but they’re just not right for each other.

It is the day of the Evergreen Christmas festival, and Michelle totally pulled it off! Ryan and Zoe go back to Evergreen! Ryan and Allie kiss! Zoe gets her wish to spend Christmas in Evergreen! Yay!

And, so, our story in Evergreen, Vermont ends, very fittingly, as a Norman Rockwell painting. The end!

I rate Christmas in Evergreen a snow globe with a picture of your puppy in it which is a 3.75/5 on my scale of snow globes.

I think everyone wishes to live in, or at least celebrate Christmas in a town like Evergreen, Vermont. I enjoyed all of the nostalgic touches–how the movie was framed like a storybook, the paintings throughout, and Allie’s old truck. I especially loved Mayor Ezra, even though no one in that town deserved to be terrorized by him. Especially at Christmas.

Also, if you could please send that Santa to my town, that would make my Christmas way cool 😎